Entertainment Reporter and Critic Bobbie Wygant has spent all 68 years of her broadcasting career with NBC 5. Bobbie joined NBC 5 two weeks before the station went on the air as WBAP-TV. To quote Bobbie, "they poured me in with the foundation."

During the early years Bobbie did live game shows, commercials and produced and hosted a live talk show for 16 years. She is noted for her celebrity interviews everyone from Bob Hope to Rob Pattinson.

In 2000, Bobbie received the "Critic's Critic Award" from her peer group the National Broadcast Film Critics Association in Los Angeles.

In 2004, she received a National Emmy in Houston making her the 17th American broadcaster to be elected into its prestigious Gold Circle for 50 years of broadcasting achievement.

Bobbie's most challenging on-air experience was Nov. 22, 1963 when her 30-minute talk show was interrupted six or seven times with bulletins about the John F. Kennedy assassination. Following each announcement she was instructed to "pick up where you left off." She did. 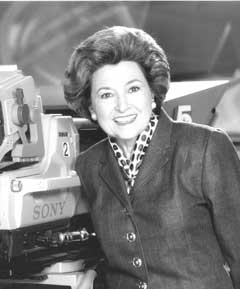